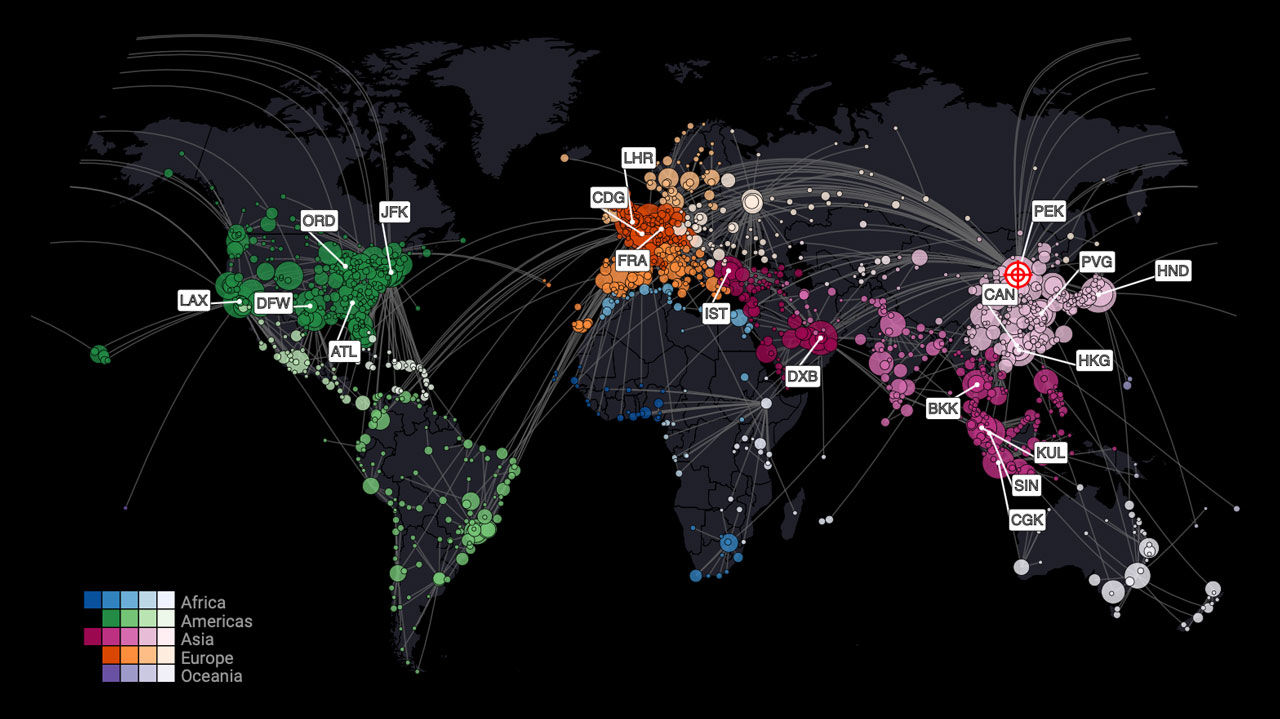 Beyond China itself, Thailand is the country that most likely will have people who arrive at one of its airports with an infection by the novel coronavirus (2019-nCoV) that has sickened more than 30,000 people. So says the latest update of a global risk assessment model created by a team of researchers from the Humboldt University of Berlin and the Robert Koch Institute that relies on air travel data.

Next on the team’s list is Japan—Osaka’s international airport, interestingly, is more at risk than Tokyo’s—which is followed by South Korea, Hong Kong, and then the United States. Russia likely has more infected people flying in than India, Germany (mainly the Frankfurt and Munich airports) is the most vulnerable country in Western Europe, and Ethiopia is the only sub-Saharan African country to break into the top 30 of virus-threated countries.

So, how seriously should this model, and the dozens of other computer simulations of the outbreak, be taken? Scientists studying the 2019-nCoV outbreak are getting plenty of data to groundtruth and tweak their models. As of yesterday, for example, the most confirmed cases outside of mainland China were in Japan (45), Singapore (28), Thailand (25), Hong Kong (24), and South Korea (23). That could be considered a partial success for the Berlin model, but it also reflects that this is a dynamic outbreak that upends assumptions at a blinding speed; for example, the airport in Wuhan, China, the outbreak’s epicenter, was closed on 23 January, which radically altered airline exportation of the virus, and today there are 61 confirmed cases on a cruise ship off the coast of Japan.

“This is not so much a tool for making quantitative predictions,” says Dirk Brockmann, a physicist at Humboldt who leads the modeling team. “Public health officials and policymakers have to develop an intuition because this virus is something unknown. Models can help you develop an intuition.”

A flurry of models of the 2019-nCoV outbreak have been shared on websites, preprint servers, and in peer-reviewed journals, and many attempt to do far more than just sharpen hunches about where infected air travelers are going to land. If they have robust enough data, models can forecast the rate at which an outbreak will grow and help predict the impact of various interventions. “When you start to include disease dynamics and population information, there’s more information than just intuition,” says Alessandro Vespignani, an infectious disease modeler at Northeastern University.

The centerpiece of many outbreak/infectious disease/pathogen models is the “basic reproduction number”, or Ro (pronounced “R zero” or “R naught”). It’s essentially how many people each infected person can infect if the transmission of the virus is not hampered by quarantines, face masks, or other factors. Modelers also look at the incubation time, which is how long it takes for the virus to cause symptoms. The serial interval factors in the time between a person developing symptoms and a contact becoming ill. In this young outbreak, unknowns riddle every model. The current estimate for 2019-nCoV’s incubation time has been hard to pin down with the U.S. Centers for Disease Control and Prevention suggesting there’s a range of 2 to 14 days. “There are many things that should be carefully weighted at this point, and that’s why the modeling has difficulties,” Vespignani says.

One of the first models to come out—by a group at Imperial College London on its website on 17 January—looked at confirmed infections outside China to infer the number of infections that likely had occurred in Wuhan. At the time the group released that model, Wuhan had only reported that 41 illnesses were caused by the virus, and the model estimated that by 12 January, the infection had actually sickened 1723 people in the city. Those estimates, which were startling at the time, seem quaint now: As of 5 February, there were 27,619 confirmed cases, and a modeling study by the University of Hong Kong’s Joseph Wu and colleagues that was published online by The Lancet on31 January estimated that Wuhan alone had 75,815 cases by 25 January.

Many of the early calculations—including the initial airport analysis done by Brockmann’s team (which does daily updates)—lost all meaning after Wuhan shut down public transportation. “That was just over 2 weeks ago, which seems like 2 years ago now,” Vespignani says.

One of the most vexing mysteries at the moment that can undermine modeling is whether people with 2019-nCoV who do not have symptoms can transmit an infection. It’s possible that there are infected people who never become ill but still transmit. There also may be infected people who transmit before they develop symptoms. “Most of the fate of the epidemic is in this element,” Vespignani says.

The viral diagnostic tests being used to confirm cases now typically are only done on people seeking care because they are ill. One way to find asymptomatic or presymptomatic cases is to examine people’s blood for signs of an immune response to 2019-nCoV. “To know the full extent of spread you’d like to collect blood samples from contacts of infected people and do the same 2 weeks later and see if they’ve developed antibodies to the virus,” says Marion Koopmans, whose team at Erasmus Medical Center is racing to develop an antibody test for 2019-nCoV. “That gives you a better estimate of spread without symptoms.”

Models may also become sharper as researchers have a finer understanding of the epidemiology of infected cases, which means details about their location, health, age, and gender. Those data can help modelers make more reliable assumptions about factors like incubation time. To that end, computational epidemiologist Moritz Kraemer at the University of Oxford has spearheaded an unusual effort to compile a “line list” of confirmed cases by sifting through government reports, the medical literature, reliable media accounts, and social media. “Line lists contain incredibly useful information that are not visible in aggregated case counts,” Kraemer says. “Unfortunately, line list data are rarely available during outbreaks and until now only routinely collected by governments that do not share them openly.”

This line list, which has more than 15,000 cases on it now, documents everything that’s public about infected individuals. His group has already used the data in a study that assesses the capacity of countries in Africa to detect and respond to cases; two of the five most vulnerable countries on the continent, Ethiopia and Nigeria, have what they call “variable capacity” to respond to the outbreak. A modeling study by a different group used the data to assess transmission dynamics, concluding that once a place has three cases, there is more than a 50% chance the virus can become established in the population.

Making sense of Ro
On top of needing better data, models also suffer from how their forecasts are interpreted by journalists or the public. Robin Thompson, a mathematical epidemiologist at Oxford who has modeled the outbreak, contends many news stories have garbled descriptions of Ro, the basic reproduction number, and exaggerated the risk of spread. “It’s being misused in this outbreak,” Thompson says.

Most estimates for 2019-nCoV calculate that Ro is between two and three—that an infected person will infect two or three others. But this is just an average. Some infected people, by chance, won’t transmit the virus to anyone else. The real question from a population standpoint is what is the probability with an Ro of, say, 2.2, that there will be sustained transmission of the virus? With this new virus, Thompson calculates there’s a 54.5% chance of sustained spread starting from a single infected person if nothing, for example a vaccine, prevents transmission.

Continue reading article HERE
This article is from sciencemag.org
By Jon Cohen 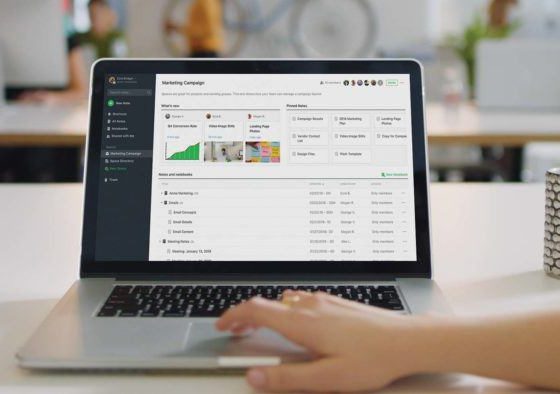 Lessons from my Evernote 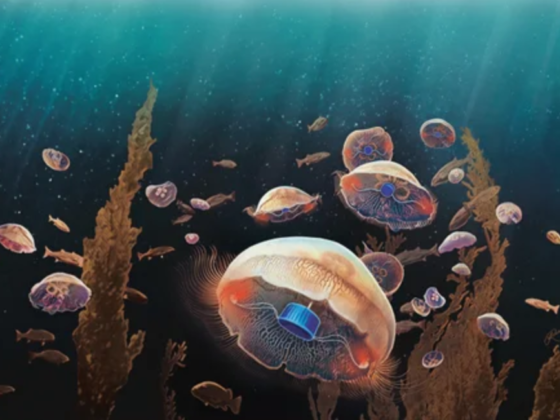